Kota Factory Jeetu Bhaiya, aka Jitendra Kumar, is one of those rare film actors who started his career with YouTube. Jitendra is so popular on YouTube that everyone must have seen some of his videos.

In this article, we will tell you 22 facts about Kota factory Jeetu Bhaiya aka Jitender Kumar, which you may not know.

For example, how he came to TVF, what he wanted to make before becoming an actor in life, and how, because of the Kota Factory, teachers started calling him and criticizing him.

You will get to read many such interesting facts in this article about Kota Factory Jeetu Bhaiya. So it is requested of you that you read this article thoroughly. 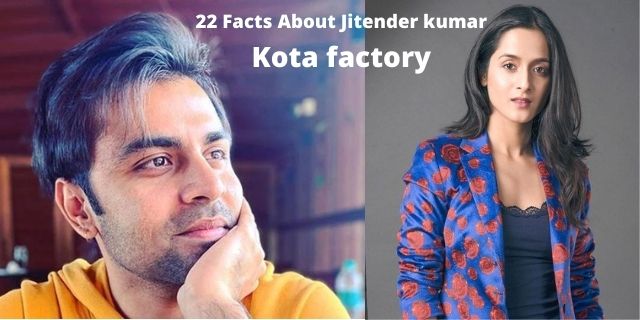 1. Jeetu Bhaiya, aka Jitender Kumar, was born and brought up in Rajasthan, where he lived in a joint family. All the people in his family are civil engineers and his family wanted him to become a civil engineer.
2. After completing school, Jitu shifted to Kota, where he took coaching for IIT. Jeetu wanted him to study Aerospace Engineering, but due to his low rank, he had to opt for Civil Engineering. Jeetu has completed his graduation from IIT Kharagpur. In an interview, he shared that while at IIT, he came to know that he did not want to become a civil engineer.
3. Jeetu had not been fond of acting since childhood, but he was very fond of mimicking actors. His mimicry must have been seen in many TVF videos. Jeetu used to participate in functions at his school, but in reality, he discovered acting in his college days.
4. Theater auditions were going on in his first year of college and his friend forced him to go to that audition. Everyone was very nervous about this, but as soon as he started acting in this audition, everyone liked it. After that, he was selected for the theatre group and everyone started to know him for his acting.
5. Like every graduate, Jeetu wanted to get a placement after college. He also wanted to leave college after 4 years with a good package job, but after placement, all his friends got jobs, but Jeetu was the only one whose job was not done. Jeetu was very upset because of not getting his job and he was not satisfied with the offers he was getting.
6. Jeetu seniors told him about a production company called The Viral Fever (TVF) which was started by one of the IIT students. TVF needed some actors and Jeetu felt that he could work in TVF until he got an engineering job, so Jeetu started working as an actor in TVF where he used to act in comedy sketches.
7. Jeetu's first video was "Har Friend Jaroori NAHI hota" This video was made in 2012 and you can imagine that original content was rarely seen on YouTube at that time.
After seeing the response to this video, his second sketch, "Munna jazbaati" was made, which was liked by the audience even more.
8. Jeetu worked for TVF for 3-4 months before accepting a job offer that required him to relocate to Bangalore. Jeetu had left TVF at that time and he started working as an engineer in Bangalore. Almost a year after working, he realized that his life had become very boring and monotonous. Jeetu used to work the whole day in his office, and he started remembering his old days with TVF.
Jeetu realized that maybe he was not ready for the 9 to 5 jobs, so he decided that he would start his acting career back.
9. After this, Jeetu quit his job and applied to the National School of Drama. Jeetu was selected in the first round, but he was not registered in the interview round.

Jeetu was not at all happy with this, but his family was very happy with his rejection. They did not want Jeetu to become an actor, and due to this rejection, they thought their son would go back to his job.

But Jeetu's plan was something else. Jeetu had decided that he would pursue his career in acting and he had also cleared this with his father. Jeetu's father supported him, but his only condition was that he should not go to Mumbai and do drugs.

10. Jitu gives the credit of his acting career to Biswapati Sarkar. Biswapati had been Jeetu's college senior and it was he who offered Jeetu to join TVF. Biswapati and Jeetu have also done many college shows together and they knew that Jeetu can become a successful actor.

11. After doing several sketches for TVF, Jeetu was seen in a lead role in the web series TVF Pitchers. This show became so popular that at that time it was watched the most on YouTube. Everyone has been waiting for season 2 for many years, and chances are it might be coming soon.

If you have seen this show, then tell us in the comments whether you found Jeetu's character relatable or not.

12. Because of TVF Pitchers, he was seen as a versatile actor, but before that, everyone knew him only through comedy sketches.

Pitchers were the only show from which everyone started knowing him as Jeetu. His character's name in the show is Jitender Maheshwari, and he had decided on this name. Jeetu did this because, even after so many viral videos, people did not even know his name. That is why he requested the makers to keep his original name in this series so that people could know him by his name only.

13. Now let's talk about his web series Panchayat, which the audience has liked very much. There is also a very interesting fact related to this show. When Jeetu was offered this role, he felt that this role was exactly like the character, Mohan of Swadesh. In the movie Swadesh too, Mohan's character lives in the village, and initially, he has difficulties living there, but gradually he realizes how much peace there is in life. Jeetu said that his favorite film has always been Swadesh and he is a big fan of Shahrukh.

After seeing the success of the show, everyone is waiting for its season 2. Panchayat has a very amazing web series that people like very much.

14. Now let's talk about his series Kota Factory, because of which the teenagers call him by the name of Jeetu Bhaiya. In the show, he plays the character of a teacher, which is liked by all the students.

There have been a lot of similarities between this show and Jeetu's life. When Jeetu himself was an aspirant, he did preparation for IIT by staying in Kota. Apart from this, when Jeetu came new to Mumbai, he used to teach part-time tutoring. He used it for his character in Kota Factory.

He stands out in Jeetu Bhaiya's character and if he was not in this show, then hardly this character would have been so full of impact. In the comments, tell us which dialogue inspires you a lot, Jeetu Bhaiya in the Kota Factory.

15. Jeetu Bhaiya's character became so popular in Kota Factory due to which a real-life controversy also happened. In the show, Jeetu says that instead of inorganic chemistry, the focus should be on other subjects. Because of this one scene, Jeetu started getting messages from teachers, they were told that students were not coming to give the inorganic chemistry exam in reality after seeing that part.

Regarding this, Jeetu said in an interview that the audience should understand the difference between reality and fiction.

16. Jeetu's fans must have known that he had also sketched Arvind Kejriwal. In this sketch, Jeetu was acting dressed like Kejriwal and that video went viral on YouTube.

Then, a year later, Arvind Kejriwal was invited to a TVF show "barely speaking with Arnab" where Jeetu had mimicked him in front of Kejriwal, which was actually very funny.

17. Jeetu was cast opposite Ayushmann in Shubh Mangal Zyada Saavdhan. The audience liked Jeetu's performance in this film and hardly you know that Divyendu aka Munna Bhaiya was first approached for this role.

18. Jitender's first film as a lead was Chaman Bahaar. In this film, Jeetu plays the character of a paan wala. However, he rejected this film because he was working on a TVF project, but that project never got made. After this, Jeetu met the producer of the film in flight, who again approached Jeetu about the film. It was just from there that he agreed to do the film.

19. Very few people know that Jeetu has also done a film named Gone Kesh. In this film, Shweta Tripathi plays the lead character. It was a rare concept film and Jeetu played the role of Shweta's love interest. His character in this film was also very good and you must watch this film.

20. Jeetu has also done a reality show called Airtel Connect Live. In this show, he had to be locked in a room for 3 days and his entire experience was telecasted live.

21. In Jeetu's filmography, there is a mention of a film that very few people know. The name of this film was Shuruvaat Ka Interval, in which there were short films of many different segments. Jeetu is seen in a story in this film where he is a part of the production of a Ramlila. In this story, the story of Ramleela's back story has been told, in which Jeetu has played the role of Bhagwan Laxman.

22. Jeetu believes that an outsider always has to exert more effort and nepotism is not only in the film industry but everywhere, so nepotism has never been an excuse for Jeetu. Instead, he has focused only on his acting.

Please share with us in the comment section what's your favorite character of Jitender Kumar, aka Jeetu Bhaiya.

What People Are Searching Right Now on Google in India